CLEVER Global starts trading at Stock Exchange (MAB) with a capitalization of 12.7 million

CLEVER Global, a technological and outsourcing company specialising in the control processes of contractors and subcontractors, will start quoting in Alternative Stock Exchange Market (MAB) on Thursday 22nd Decembre with a market capitalization of 12.7 million euros. It will be the sixth Andalusian company and first Sevillian to be listed in the MAB.

The company has issued new shares for a total amount of 2.4 million euros after issuing 3 million securities at a price of 0.81 euros per share. New shares will be represented by book entries and will have the same rights as those currently in circulation.

Following this capital increase, 64% of the company’s shares will be controlled by the founder and chairman of the company’s board of directors, Fernando Gutiérrez, through Fuentiérrez SL, 14% will be held by the venture capital fund Al-Ándalus Capital FCR -managed by the entity Alter Capital Desarrollo, S.G.E.I.C.-, with the rest of the shareholding being made up of ‘family offices’, institutional investors and executives of the company.

Reference shareholders are committed not to sell their shares (“lock-up”) until one year after the admission to trade of shares in MAB.

The company has appointed VGM Advisory Partners as registered advisor, the placing entities are GVC Gaesco Group and QRenta Agencia de Valores, and Garrigues is the legal advisor in the process.

The president of CLEVER, Fernando Gutiérrez, has indicated that the raising of funds resulting from the capital increase will rise awareness and access new financing to support future growth both organic and through acquisitions.

In its expansion plan, CLEVER is committed to increase its presence in its main markets and boosting it in the Anglo-Saxon and Middle East markets, and expand its portfolio of solutions and services in the area of ​​management of contractors and suppliers through new developments and acquisition of companies with complementary services. 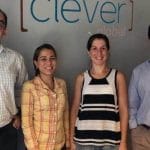