CLEVER was only surpassed by the French ABEO, a company dedicated to sports equipment, whose turnover amounted to 167 million euros last year, 70% of which generated abroad. It has a portfolio of leading brands in the world of sports and leisure such as Gymnova, Janssen-Fritsen or France Equipement, which are presented at major sporting events, including the Olympic Games. 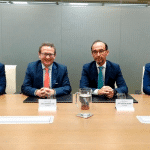