The Spanish Development Finance Company (COFIDES) supports CLEVER Global, S.A., a Sevillian company focused on management consultancy, technological services and SmartSourcing for subcontracting and labor control, in its international expansion in Peru. To this end, COFIDES will grant 230,000 euros through a co-investment instrument charged to the own resources of COFIDES (25%) and FONPYME (75%).

This support has allowed the company to acquire the Peruvian company Prevecon, which develops occupational health, training and occupational risk prevention activities. Along with the contribution made by the company, the total investment of the operation amounts to 330,000 euros. This is the second experience in which COFIDES and CLEVER Global collaborate, after counting in 2014 with the support of COFIDES for the implantation and constitution of the CLEVER Peru subsidiary in the Latin American country.

The president of COFIDES, Salvador Marín, has highlighted the international experience of this SME, which already has a broad international expansion with subsidiaries in Mexico, Chile, Argentina, Brazil, Colombia, USA, Peru, Honduras, United Kingdom, Uruguay, Ecuador , United Arab Emirates and Australia. At this point, the president recalled that “the internationalization of Spanish SMEs is one of our main objectives, because by expanding their activity abroad they reinforce their parent company, they are more solid and they acquire a larger size”.

For his part, the director of Strategy and Organization of CLEVER Global, Alejandro Jos, thanked the support of COFIDES: “The commitment of COFIDES for us started in 2014, it was at a very early stage of our project, they knew we had a journey and we thank him very much for his support and for continuing to trust in our project. “On the other hand, he pointed out that” CLEVER Global has been advised by Garrigues in both operations “.

Founded in Seville in 2004, CLEVER Global is a technology and SmartSourcing services company specialized in the coordination of business activities and the global management of suppliers and contractors, employees, machinery and vehicles. The company has knowledge of the subcontracting laws of each country and the specific regulations on labor control and risk prevention. At the end of 2016, the company had 226 employees. 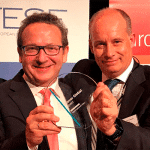